What is hydrogen gas and how is it made?

Hydrogen gas is colourless, odourless and tasteless, just like natural gas. It emits no carbon dioxide when used for energy.

Hydrogen and oxygen atoms are separated from water through electrolysis powered by renewable electricity.

Blue hydrogen has carbon captured as carbon dioxide and stored as gas. 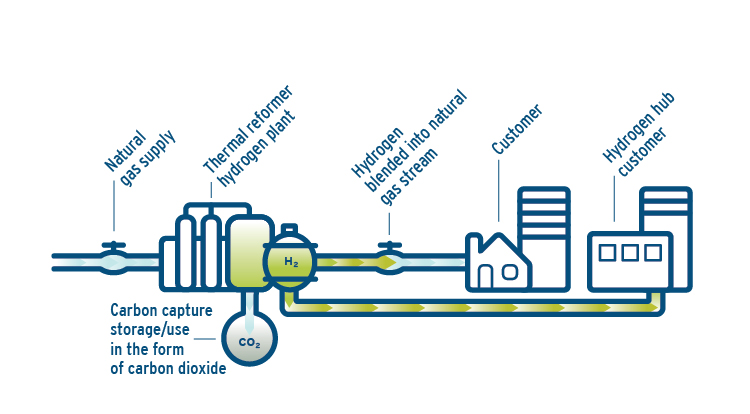 Turquoise hydrogen has carbon captured as a solid substance that can either be stored or used by other industries.

We're working to continually increase the amount of renewable and low carbon gas in our system to help meet provincial climate action targets. We’re already making great strides in increasing our Renewable Natural Gas2 (RNG) supply: by the end of 2022, we expect close to two per cent of our total gas supply to be RNG. By 2025, we expect to have RNG contracts that will exceed 11 per cent of our annual gas supply.

Since hydrogen gas doesn’t emit carbon dioxide when used for energy, adding hydrogen to FortisBC’s gas system would help us further decarbonize by replacing conventional natural gas and move us closer to our goal to reduce our customers’ greenhouse gas emissions by 30 percent by 2030.

Building a hydrogen industry in BC

The BC government has taken several actions to encourage the growth of a hydrogen industry, including the announcement of the provincial hydrogen strategy, a blueprint for how renewable and low carbon hydrogen will support provincial climate goals and create new jobs in BC.

Utilities like FortisBC can be instrumental in building the province’s hydrogen industry. We have more than 50,000 kilometres of existing gas infrastructure in BC that can be used to deliver hydrogen, and we’ve been delivering gas safely, reliably and affordably for more than 50 years.

We’re working with industry leaders to share knowledge and set best practices in hydrogen production, distribution and end-use. FortisBC is a member of Hydrogen BC (a branch of The Canadian Hydrogen and Fuel Cell Association) and an active supporter and participant in HyDeal LA–one of the most ambitious hydrogen projects in the world.

We’re currently working with the University of British Columbia’s Okanagan campus and multiple international joint industry programs to study how to safely integrate hydrogen into our natural gas system.

We believe that hydrogen has the potential to play a significant role in a low carbon energy future and can help meet the goals of the province’s CleanBC strategy.

A study we commissioned with the BC Bioenergy Network and the Province of British Columbia shows the province holds a wealth of potential to make renewable and low carbon gases, and hydrogen is the single largest potential source.

Learn more about all the ways we’re working to reduce our customers’ emissions.

1FortisBC uses the term renewable and low carbon gas to refer collectively to the low carbon and carbon neutral gases or fuels that the utility can acquire under the Greenhouse Gas Reduction (Clean Energy) Regulation, which are: Renewable Natural Gas (RNG or biomethane), hydrogen, synthesis gas (from wood waste) and lignin. Depending on their source, all of these gases have differing levels of lifecycle carbon intensity. All gases would meet the proposed B.C. carbon intensity threshold for low-carbon gases of 36.4 g CO2e per megajoule set out in the 2021 B.C. Hydrogen Strategy.